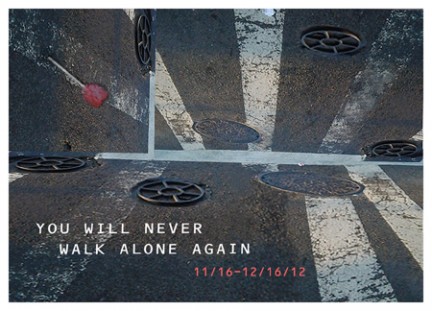 You Will Never Walk Alone Again

“Upon those who step into the same river, different and again different waters flow.” Heraclitus BC 475This quote, which is the basis for the current show at Radiator gallery, suggests that all things are ever changing, transforming and never stagnant in the state of actuality. Everything in the natural world contains opposition, and in that struggling coexistence movement appears. The concept of constant movement through opposite forces enlightened the path of knowledge of the ancient Greeks to understand the world in its nature. It was later applied in modern philosophy to examine class struggle and contradictions in society.The transition of one quantity into another, and the notion of a phenomenon that existed but remained unnoticed because it appeared as waste or as too brief a moment in life, define the aesthetic in this exhibit. Through the use of everyday objects, recycled materials, video recording and collage, the artists find a common denominator in the production of art concerned with mutability as a natural phenomena. Working from Honduras, New York and Puerto Rico they operate as nomads of circumstance, strolling through their immediate environment as gatherers of raw material. By exploring the circularity of time and the eternal return they engage in the re-enactment of socially constructed myths through ritualistic actions and mundane objects. Their work resembles the search for a true reality, which is hidden in its gradual succession toward appearance. Perhaps the purpose of this process is to suggest a new path, a walkable line between the struggle of opposites, sustainable, as it is cyclic and contemplative as an art form.In the video installation LSC Noah Klersfeld depicts a chain-link fence that has undergone a temporal reconfiguration, weaving together the activities taking place at a busy traffic intersection during the morning commute in New York City. In his works he acts upon the architectural patterns that bear passive witness to daily ritualistic behavior.The idea of distortion between materiality and Illusion is a key aspect in Klimentina Jauleska’s work. In the piece Never Getting There she uses a TV screen to create an optical effect of a pair of shoes placed behind it. The viewers can move around the piece, experiencing a fully transformational environment always animated by their walk.Kristine Servia created a series of drawings, Reciprocal Lines, as she talked back and forth with a curator in Puerto Rico from her studio in Chicago. Kristine was giving him instructions in order to produce a piece for particular show. The drawings are an intricate recording of the dynamic among curator/re-creator, artists and visitors to the space during the opening.In the two-channel video White Balance Tamas Veszi combines the circular motion of a bubble machine with a moving bicycle. The hypnotic sound of the bicycle and the short loop of the video refer to the calibration of both the physical and psychological state of engaging with the city and its challenges.Adan Vallecillo’s work Topography XV depicts an elastic map of the city of Tegucigalpa in Honduras, employing overly-used inner tubes of car tires. Adan is interested in registering time and vulnerability through the wear and tear of the material by examining the spatial relationship in maps of immeasurable cities and languages.I’m feeling Lucky is a piece made of five digital prints based on Google Search screen shots of Puerto Rico. Through the formulation of basic questions Karlo Andrei Ibarra investigates the way we function, according to the quick responses of a machine.Victor Sosa shows a series of collage drawings on shipping envelopes, and newspaper cutouts depicting protests around the world. The fragmentary quality of his work, similarly to Klersfeld’s LSC, refers to temporal reconfigurations in the urban landscape.In two short videos – Plastic Bag, shot in the lower east side of Manhattan, and Iris, recorded in his native town of Rio Grande Puerto Rico – Javier Bosques proposes simple gestures that, through repetition, invite the viewer to contemplate the phenomenological narratives of urban and rural landscapes.Curator Carlos Rodriguez is an artist and musician currently working in Brooklyn, New York. In 2003 he was awarded the Skowhegan School of Painting and Sculpture Residency. Carlos has a combined BFA from the School of Fine Arts of Puerto Rico and The School of the Museum of Fine Art in Boston. He also earned an MFA from Brooklyn College in New York. This is his second curatorial project.