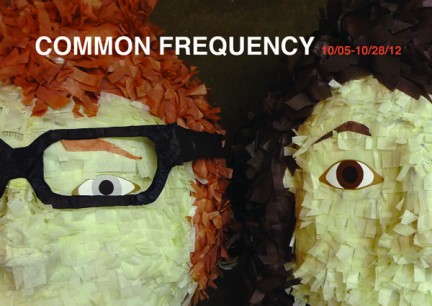 Common Frequencies is a showcase of four artist couples. It is focused on each pair’s creative practice, in a daily reality where art and life are often inseparable, as an example of a micro-system and of a complex set of negotiations.

The exhibition represents a landscape of synched voices and their evolution in-to common artistic languages. It consists of works across the mediums that are the outcome of both collaborative and parallel strategies. Thus it raises questions about authorship, the power dynamics of a shared space, personal boundaries, gender roles and cross-cultural challenges. If in some cases individual voices are highlighted, in others two become one and, taken further, even “another” one.
Piñata Portrait by Jennifer and Kevin McCoy welcomes the visitors with a potential promise of both destruction and reward. Exemplifying the tendency of the McCoys to include autobiographical references in their projects, here the piñata becomes an image-cliché of the battling married couple and the fragility of the collaborative model.

Boryana Rossa and Oleg Mavromatti show a large-scale mural incorporating photography, text and video. Developed over years of collaboration their work presents a critical examination of gender stereotypes. Vitruvian Body is a female embodiment of the “ideal proportions” of the human body as defined by the Roman architect Vitruvi, while Before and After is a performative expression of the ultimate bond, where two bodies become one but in imperfect balance.

Concepts of balance and coordination are intricate parts of Eve Bailey’s work. Shoulder Path occupies the center of the exhibition space, raised on a platform evoking desire. In this piece, and in the video Work Force, the artist uses her body as a primary tool and experiments with equilibrium through physical, mechanical and conceptual means. Skin of Our Teeth, a collaborative photograph by Adam and Eve Bailey, shows the two artists wearing each other’s smiles, in a sequence resembling a photomaton.

Yana Dimitrova and Sebastien Sanz de Santamaria create a dialogue employing symbols and text. Yana’s project I Don’t Think That’s Funny taps into issues of cross-cultural communication while hinting at the underlying ideological implications. Eat Faster is a work of embroidery, which functions as an acknowledgement of time in connection to labor and notions of success. Sebastien’s text-based drawing series Natural Calls, shown parallel to Yana’s wall, is the outcome of a long process of observing each other in a domestic situation, which results in name-calling.