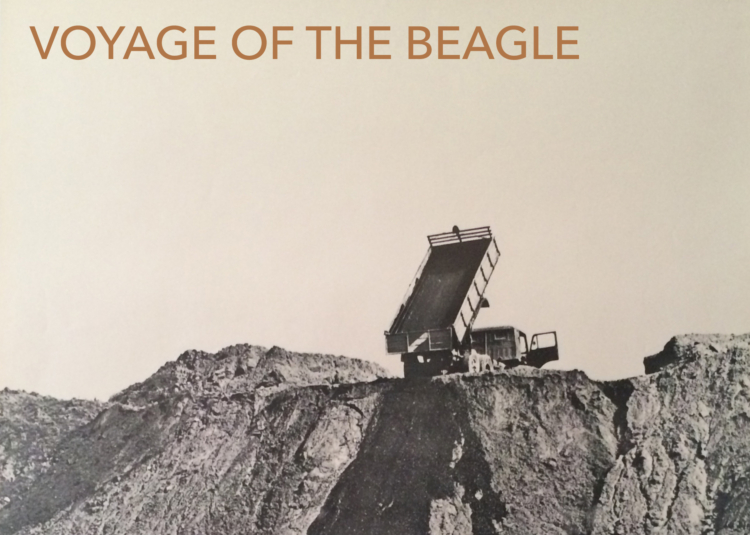 Voyage of the Beagle

March 18th – April 22nd, 2016
Opening: Friday, March 18th 2016,  6 – 9 pm.
Artists: Robert Smithson, Sol LeWitt, Greg Drasler, Steve Keister, Peggy Cyphers,Marilyn Lerner,  Jill Levine, Pam Longobardi, Deborah Bright, Sean Scully, Barbara YoshidaCurated by Peggy Cyphers  ’Voyage of the Beagle‘ brings together works by painters, sculptors and photographers whose artistic practice engages a dialectic of space and location.  Industrial wastelands, architectonic ruins, eroding cliffs, terrestrial frontiers, cultural detritus, lost frontiers – these are some of the starting points for diverse discussions that expand notions of entropic time and space into reclamation and reinvention.   Artistic engagement with site-specific locations has voyage as an ingredient, a practice that finds its roots in cultural history. Artists and scientists in the 1800’s were setting sail, traveling in search of new worlds, utopia, the Garden of Eden and a monumental adventure with the earth that would spur an unprecedented renewal of their creative energies. An expedition or experience of location was decisive, constituting a formative influence or turning point and providing subjects that played a substantial role in their oeuvres.  In 1831 Charles Darwin began his infamous 5 year voyage on the H.M.S. Beagle. Darwin writes late in life in his biography, “The Voyage of the Beagle has been by far the most important event in my life and has determined my whole career. “Artists in the 1800’s such as Frederick Church, Albert Bierdstadt, James Whistler, among many others, have documented in their travel journals that no other single event in their artistic development had the same impact.  The eleven artists in this show dialogue with adventure, the unknown, exploration, and expedition while engaging in a dialect of time and place and the entropic process.”   In 1967 Robert Smithson began exploring industrial areas around New Jersey. He was fascinated by the dump trucks excavating tons of earth and rock that he described in an essay as the equivalents of the monuments of antiquity. These explorations were the basis of all his major writings, Earthworks and Site/Non-Site sculptures.       Environmental artist and painter Pam Longobardi’s explorations of the Hawaiian Islands and the massive marine debris deposits that clog the beaches, lead to her internationally acclaimed  “Drifter’s Project.”For Greg Drasler, a series of cross country road trips inspired his painting series “Road House Project,” which focus on the transitional places along two-lane highways. These travels were made possible through the generosity of the Guggenheim Foundation.           The genesis of Sean Sully’s sumptuous gridded paintings can be found in 1983, when Scully was in Mexico observing the ancient architectural ruins of the remote Yucatan area and the crumbling dry-stone surfaces. He subsequently began using vertical or horizontal bars in the manner of a dry-stone wall.  Marilyn Lerner’s extensive travels to Asia engage her artwork with multiple cultural associations.  She writes “The relationship between color and sound has always held interest and I aspired to make paintings that reflected the sound of Javanese gamelan music.”  The Miocene fossil deposits and eroding clay cliffs of the Chesapeake Bay have continued to inform the paintings of Peggy Cyphers.  This life long engagement with such a dramatic entropic environment and its flora and fauna, informs her painting’s subject and texture.Jill Levine’s travels every year to the ruins of the Yucatan Peninsula. Her fascination with cultural artifacts of the region manifest into elaborately painted wall sculptures.  The work reinterprets ancient iconographies into exotic hybrids. Steve Keister’s sculptures cultivate a correspondence between pre-Columbian art of Mesoamerica and Styrofoam packaging he scavenges from city streets, chosen for their potential resemblance to Aztec and Mayan architectural fragments.  His early work suggests extra terrestrial lands and flying saucers.Deborah Bright’s photographic works dialogue modern landscape with political histories. This series photographed in Israel deals with the juxtaposition of ruins of former inhabitants and the current reclaimed landscape.Sol LeWitt’s $100 Drawings from the 1970’s examine notions of dislocation and disembodiment, challenging the factual assumptions of maps while playfully tracing his own associations and interpretations into the work.   The foundational theory of these early works would inform his later practice and Wall Drawings.Barbara Yoshida’s photographic expeditions to capture Neolithic standing stones in moonlight recall pubescent camping trips in the woods of northern Idaho with her family. Her first monograph, Moon Viewing: Megaliths by Moonlight, was published by Marquand Books in September 2014.
PRESS RELEASE