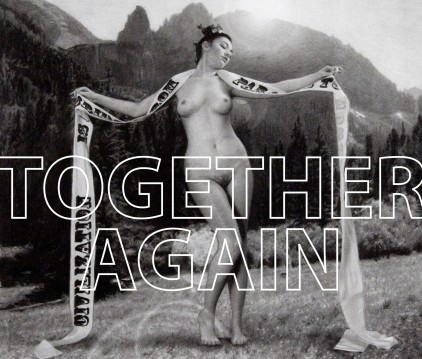 The show’s title is based on a piece by Vikenti Komitski, which presents an intriguing world map whose continents have come together in a single, interconnected body.

Is this restored Panguea, a Utopian island or a new world order? Is it the result of natural disaster or of carefully engineered forces of globalization? Is it before us or after us?

“Together Again” is charged with both contradiction and potential, fueled by a Romantic sentiment that togetherness/solidarity is still possible. The show is immersed in the “ideal,” presenting artistic gestures that push beyond a possible yet desirable future.

Landscape is a recurring motif, behind which lie attempts to observe and contemplate, efforts either enhanced or mediated by technology. This detour back into the natural realm is interrupted by an accelerating tension between nature and culture. Thus is formed the overall arch among these artists’ exercises in Utopia.

In Paul Jacobsen’s imagery social norms have been vanquished, renewed sensuality is everywhere and the natural world is looked upon with honor and wonder. Jacobsen first seduces the viewer with over-sexualized nudity, then confronts us with a bold pronouncement about the world we’ve created: “Civilization is a Bridge from Paradise to Nowhere.” Continuing the rhetoric further in another piece, he waves a black flag at us, suggesting unity without nationality, in a space of zero gravity.

In Yael Kanarek’s piece the viewer becomes hostage to an irresistible landscape of languages, radiating from center to periphery in a perfect red circle – a wavelet of emotions. Drawing from her personal history living between cultures, languages and body languages, and her study of Networked Society as an increasing global phenomenon, the artist proposes that the future citizen can only be post-national.

The photograph by Daniela Kostova is an ironic celebration of internationalism. A white dove has landed on the head of an infant child in a space suit, its sewn-on badges suggesting affiliation with countries previously on opposite sides of a divide, Capitalist and Communist. The image feels borrowed from a TV commercial designed to convince us of a dream which anyone’s money can buy: the Cold War is over, globalization of space is a reality and even infants can fly.

An attempt at gaining more space is seen in the video by Georgi Tushev that presents flying as Utopia. Using custom made aircrafts with mounted, remotely controlled cameras, Tushev offers an experience that challenges our physical limitations. Grounded in the immigrant experience, his work is an emanation of changing human conditions resulting from global processes. Tushev’s second piece, “Strange Attractor,” is a mysterious “formation-painting” created by the Earth’s magnetism and never touched by hand.

In Adam Frelin’s video, a golden boulder floats impossibly on water, enjoying its fictional freedom despite the constraints of its small pond. In another video, “Unknown Lesson,” (a collaboration with Michele Kong) a blind woman drives a car. In both cases, human and stone, limits set by the subject’s very nature are challenged and conquered, allowing us to experience the impossible.

This contagious spirit of “dreams come true” is a temporary reality in a participatory project by Immigrant Movement International, simultaneously an artwork and a social movement. Their “Immigrant Respect” pin becomes a flag, a gesture in solidarity – an ideal which we sense might still be possible.

Guest curator Natalia Mount organizes a series of elevator based performances and sound works, which highlight themes of contemporary cultural production of simulation and appropriation. Her projects also deal with issues of commodification, fetishism and shamanism.