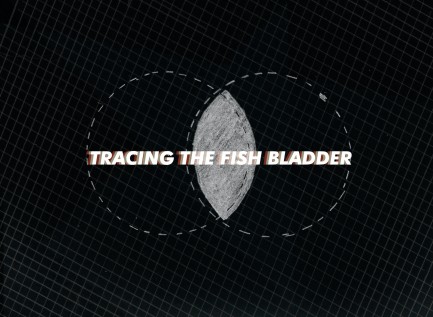 Radiator Gallery is pleased to announce the opening of Tracing The Fish Bladder show. This group exhibition curated by Guy Goldstein, is exploring the boundaries of curatorial practice in acceptable ways. This is Goldstein’s, an established Israeli sound and visual artist, attempt to explore the synergy between artist and curator role and the limitations of curatorial leeway. Goldstein is handling the curating project as his own personal artwork, using other artists’ works as components in his equation. Thus, creating new relations as well as confrontations and connections by juxtaposing them his way. A diverse range of works, from video to painting, photography, performance, interactive projection and more, is transformed into a versatile installation.

The selection of works is similar to the curatorial approach, which leans on the graphic representation of the set theory (union and intersection sets) one of the fundamental operations through which sets are combined and related to each other. The image of two overlapping circles, creating a Vesica Piscis shape (literally means a “fish bladder” in Latin). These chosen artworks, are trying to define containment and unification.

For instance, in the video Time is Like The East River, artist William Lamson is creating a micro-cosmos of two small boats made from a single canoe that was cut in half, subjected to nature’s opposing forces of the East River at slack tide. The boats are going towards each other trying to meet and link to become a single canoe again. This focuses on a rare moment in time when everything seems to be possible; by zooming out of this scene, we realize this is only a minor part of a wider context.

Throughout the performance and drawing (titled U&I) by Keren Benbenisty a new unification, between the artist and audience occurs. Keren creates her drawings in front and in collaboration with the viewer, by using their fingerprints. An intimate moment is created, reminding in a way a contract signing with the viewer.

In his photograph, taken from the series Place (2012), Bill Jacobson created a minimalist still-life image. Using layered blank boards, in minor colors, placed in the center of a photographic format which blurs the differences between what seems to be both abstract and real, painting or photography at the same time. The way in which the photographed object was placed in this work, usage of specific color scale and the attempt to create a “place within no space” are all an expression of the “union and intersection sets”, as this exhibition trying to do.

This is only a glimpse at a partial list of works exhibited in the show, whereas the wider view is revealing both questions and doubts regarding similarities, common denominators, and concepts all woven by the curatorial act.

Guy Goldstein is an artist and musician, currently lives and works between Tel-Aviv and New York. Holds a MFA from The Bezalel Academy of Art and Design in Jerusalem (2005-2007). Studied visual communication art and design in Wizo Haifa Academy of Art & Design (1997-2001).

Goldstein’s works exhibited worldwide (Europe, USA and Israel) in museums and galleries, he awarded the Minister of Culture Award for Visual Artists (Israel, 2012) among other imported awards and scholarships in the past. Guy participated recently in Residency Unlimited program in Brooklyn (April-August 2012). Guy Goldstein is a bass player, member at the Israeli Rock ‘n’ Roll band – Reines Girls. Goldstein is the Director of the Visual Communication Department at Musrara School of Photography and New Media, Jerusalem.