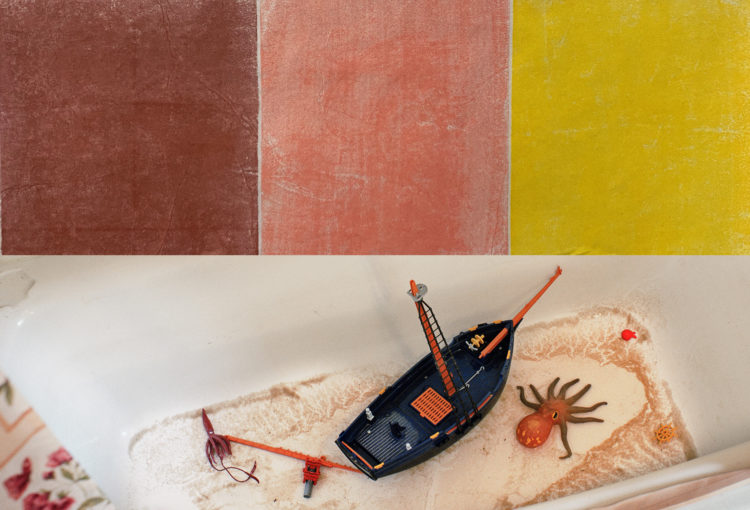 To look at the sea is to become what one is.

Funneled by the persistence
of waves, the sea recoils
just to the line of the horizon

–Etel Adnan, from “The Sky that Isn’t”

Pairing photographs by Manal Abu-Shaheen and sculptures by Oscar René Cornejo, To look at the sea is to become what one is considers ways of understanding place, somewhere between vision and memory, emotion and history, self-making and post-war forgetting. Together, Abu-Shaheen and Cornejo consider how we describe places that are impossible to return to–at least in the ways we remember them–despite their central importance in our emotional and intellectual lives. For both Abu-Shaheen and Cornejo, landscape and its materiality become a way of understanding what it means to be a post-war subject, or to come from a family fleeing conflict: both artists’ practices consider what we know about a place, a landscape, and its fluidity over time. Titled in homage to poet Etel Adnan, the exhibition finds the ghosts of the past in our intimate connections to the landscapes around us. These phantoms wander sites of ruin and reconstruction, touching the edges of how we understand ourselves, far from home and up against the constant movement of histories.

Cornejo’s sculptures, made at the scale of the human heart, continue his longstanding interest in the materials of construction as metaphors for displacement and resilience. He works with paired objects made of cotton, fresco, wood, handmade paper, and woodblock prints. Many of the objects hold plants and flowers; they are made at the scale of the things we can carry with us in crisis, and they enact the enigmatic healing force of portable, personal altars. Abu-Shaheen’s photographs follow the lives of her brother and his children at their farm in rural Pennsylvania. As structures crumble and are rebuilt, the children make worlds for themselves in costumes, collections of objects, and outdoor play. In their intimacy over a span of many years, the photographs allow the brave embrace of one American dream to abut the insistent difficulty of building a life far from home. Seen together, the works connect in their deep relationships to color and material, to scale and the quotidian. But they also remind us of the journeys so many of our elders have taken, so many of our beloveds still take. To be “in the heart of the heart of another country,” as Adnan writes, is to understand the depths of loss, to experience linguistic and cultural separations impossible to describe, and yet, still, to stitch together a life of both or many places. To look at the sea is to study one’s vulnerability, to embrace endless movement, to feel distance, and yet, still, to find the center of the self, even in the heart of constant change.

About the curator:
Laura August, PhD makes texts and exhibitions, often around shared geographic and metaphorical landscapes. Since 2016, she has been working on mud, stones, and the sounds of storms; she is currently at work on a book-length essay about corn, mud, and historical violence in the middle of the Americas. Her projects are collaborations with artists, poets, activists, loved ones, and those we have lost. In 2017, she received The Creative Capital | Andy Warhol Foundation Arts Writers Grant for her writing in Central America. She served as critic-in-residence at the Core Program at The Museum of Fine Arts, Houston from 2016-2018, and she has written for numerous international journals, magazines, exhibition catalogs, and artist monographs. Her curatorial projects have appeared at artist-run spaces, galleries, museums, public sites, and universities in the U.S. and Central America. She is founding director of Yvonne, a residential project space in Guatemala City, where she divides her time with Houston.