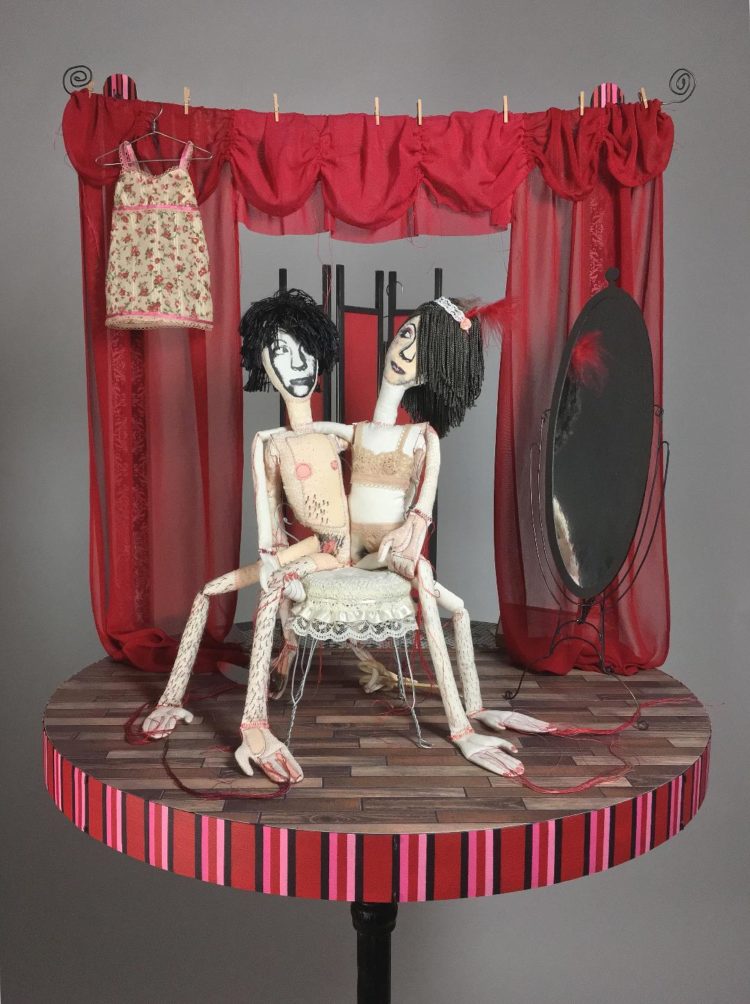 Freaks, Geeks, and Strange Girls is a solo exhibition of new works by Jody MacDonald. A merger of fact, fiction, and art history, MacDonald’s sculptural dioramas explore a set of characters on the fringe. The work takes its influence—along with the exhibition’s title—from a book of the same name published in 1996 showcasing an anthology of banners, backdrops and advertisements created for 19th and early 20th century American sideshows. These banners serve as a jumping off point for MacDonald to muse on her own imaginative absurdities and bring a set of fictional characters and circumstances into play.

MacDonald’s sculptures tell a story the viewer seemingly enters into halfway through. Each diorama is intensely crafted and layered with minutely detailed elements that—when read collectively—offer a deeper understanding of each character’s fundamental traits and desires. The works, with titles like Dogfaced Boy, The Clown, or The Hermaphroditic Goat, pull reference from actual advertised sideshow acts and expand upon each narrative, inserting situations of MacDonald’s creation.

Each piece is layered with details thoughtfully inserted by MacDonald to take the viewer down the rabbit hole with her. They demand attention—and reward it—with details such as the miniature magazines in Dogfaced Boy, complete with headlines and readable text, including a purpose-written article by the artist. Or the IKEA-like instructions for fictional products such as “SKÄRA” or “KAPA” (translating to “cut and “sever” in english) found in the piece Conjoined Twins.

The artworks meld sideshow influence with contemporary culture and art history; backdropped by scenes of recognizable artworks such as Édouard Manet’s Bar at the Folies-Bergère, David Hockney’s Portrait of Nick Wilder or, in the work Monkey Grrl—a half-monkey half-girl boxer staged for the prize fight—MacDonald’s own homage to the Guerilla Girls and the fight of women artists to gain their proper recognition in Art’s main ring; the title also a nod to the punk feminist movement Riot Grrrl of the 1990s.

MacDonald’s sculptures become a performative set of complex identities that can be read as a reflection of our own culture. They are mirrors—symbolic reflections to a claim of “realness”; a fun house distortion of reality, with each characters’ likeness a slightly distorted—but recognizable—photo-transfer image of the artists’ own face.

Jody MacDonald is an artist whose art practice is an ongoing exploration of identity, hierarchies, and stereotypes characterized by dark humor and an obsessive attention to detail. Her fastidiously crafted work has been exhibited in galleries and artist-run centers across Canada and the US, with solo shows at Galerie Connexion, Fredericton, NB; Acadia University Gallery, Wolfville, NS; Latitute 53 Contemporary Visual Culture, Edmonton, AB; Campbell River Art Gallery, Campbell River, BC; and Fifth Parallel Gallery, Regina, SK. Her mixed media drawings, paintings and sculptures are held in numerous private collections throughout Ontario, British Columbia, and New York. MacDonald is a graduate of the Emily Carr University of Art + Design and is a recipient of a 2019 New Work Grant from the Queens Council on the Arts. She is currently based in LIC, Queens, NY.

The works in this exhibit are made possible, in part, by the Queens Council on the Arts with public funds from the New York City Department of Cultural Affairs in partnership with the City Council.