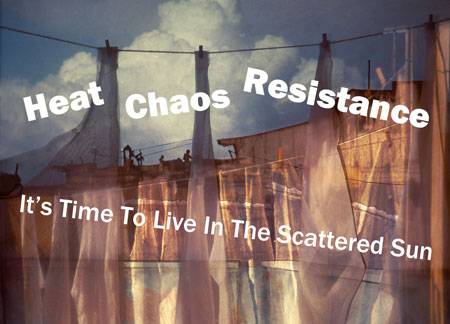 Radiator Gallery is pleased to present Heat Chaos Resistance – It’s Time To Live In The Scattered Sun, a sociopolitically-conscious print and drawing exhibition displaying the work of twelve contemporary artists. The exhibition features examples of both process: artist maquettes that serve as a ‘stage’ for photography; watercolor drawings that work in conjunction with text as part of ethnographic studies taking ultimate shape in books; graphite and gouache drawings inspired by the graphic clarity of the print; and product: anti-war digital prints and posters; monoprints that envision a brief meeting with cosmological time; screen prints that explore a reconciliation between the spirit and physical worlds; etchings that offer abstract accounts of the human condition; pigment prints that find inspiration from news photographs of people in disastrous situations; and zines documenting a generation’s battle with the War on Terror.

Heat Chaos Resistance – It’s Time To Live In The Scattered Sun (the latter half of the title is from the Doors’ “Waiting For The Sun”) was conceived in the spring and summer of 2013, a period that witnessed a burst of political activity, from the announcement that levels of heattrapping carbon dioxide were at an all time high, to explosions of protest in Gaza, Turkey, to the global “March Against Monsanto”, to widespread protest in Brazil, to the leaking of U.S. and U.K. government surveillance and classified files, to bloody revolts in Egypt and Syria, and to the looming threat of U.S. military action in Syria. The heat of the warm months represented an incubator for activism as one event after another boiled over between May and October.

Heat Chaos Resistance examines the print, a medium with a history of sociopolitical content and context – from Kathe Kollwitz’s poignant prints depicting the tragedy of war in the early 20th century, to the direct action posters of ACT UP in the later 20th century – its potential to reflect the injustice and perils of the world around us today; to translate our state of despair into visible forms of protest and empowerment, to spread awareness, and to reflect, teach and heal.

Alyssa E. Fanning is an artist, writer and curator. She received her BFA from Pratt Institute in Brooklyn, New York in 2008 and her MFA from Montclair State University in Montclair, New Jersey in 2012. Fanning has exhibited across the United States at spaces including White Box and ABC No Rio, New York, NY; Mortville, Chicago, IL; the University of South Florida, Tampa, FL; and the Arts at Marks Garage, Honolulu, HI, among others. Fanning has curated with the Manhattan based curatorial collective, BROADTHINKING, and independently. In 2012 Fanning self-published her own monograph Disaster Off the Hackensack. Fanning has been involved in social activism since 2001 when she joined Bergen Action Network, Bergen County, NJ, a grassroots activist organization dedicated to fighting government and environmental injustices.

We cannot display this gallery