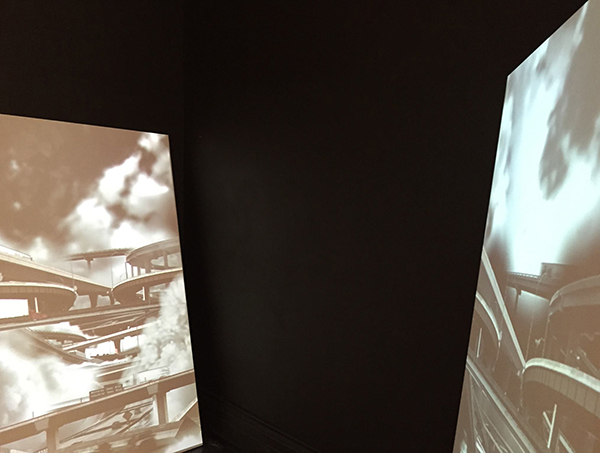 Sticking my Fingers in the Flesh of Utopia

Happenland is build around the premise “The artist has honored the brainwave”. What does it mean, “to honor”? The artist has made a process of association so direct that it wants to be immediate. What needs to happen in order to lure the concept residing in a mental space into a physical world—the world of the works, which the artist can make—excludes any symbolic processes that could contaminate this “passage”. As an .exe file, the brainwave installs itself in both minds—emitter and receptor—and acts.

There is humor in Happenland, and a recurrent play with dysfunctional ideals—from architecture ones, to philosophical, to almost metaphysical—and dead ends. In the case of Meredith, Cliff and Eva, the works are also clearly stepping into technologically new, semi-reality spaces: 3D animations, the Internet, dystopic imagery, and phantoms of consumerist futures. “Sticking their fingers in the flesh of utopia”, the artists are reaching over some invisible fence, daring to grab and hold on to some utterly impossible, but imaginable “deed”—action, image or idea—and dragging it back to us.

Panelists are invited to discuss the provenance of the mental image and its coming into existence. How the novelty of an image affects its action? How are the artists navigating through permutations of symbols and structures? How are metaphor and contextual dependency resisted? Are we testing meanings for impossible futures?

Agnes Berecz
Ágnes Berecz received her B.A. and M.A. from ELTE University in Budapest and completed her Ph.D. at Université Paris I (Panthéon-Sorbonne). Berecz specializes in post-war and contemporary art with a particular focus on transnational modernism and the cultural politics of painting. Her writings have appeared in Art Journal, Art in America, Artmargins and the Yale University Art Gallery Bulletin as well as in European and US exhibitions catalogues. Berecz is the author of the book, Contemporary Hungarian Painting (2001), and the New York correspondent of Műértő, a Budapest based art monthly. Her most recent work includes the two volume monographic study, Simon Hantaï, and the essay, ‘Time to Knot’, published in the catalogue of Hantaï’s retrospective exhibition at the Musée National d’Art Moderne in Paris. She teaches at the Pratt Institute and lectures at The Museum of Modern Art in New York.

Gregory Volk
Gregory Volk is a New York-based art critic and freelance curator. He writes regularly for Art in America, and his articles and reviews have also appeared in many other publications, including Parkett and Sculpture. Among his recent contributions to exhibition catalogues are essays on Joan Jonas (Museu d’Art Contemporani de Barcelona, 2007), Bruce Nauman (Milwaukee Art Museum, 2006), Ayse Erkmen (Venice Biennale, 2011), and Sanford Biggers (Brooklyn Museum, 2011). His essay on Vito Acconci is featured in Vito Acconci: Diary of a Body, 1969-1973, published by Charta in 2007. Together with Sabine Russ, Gregory Volk has curated numerous exhibitions, including Agitation and Repose at Tanya Bonakdar Gallery in New York, Public Notice: Paintings in Laumeier Sculpture Park in St. Louis, and Surface Charge at the Anderson Gallery in Richmond, Virginia. Gregory Volk received his B.A. from Colgate University and his M.A. from Columbia University.

More about the exhibition HAPPENLAND here.