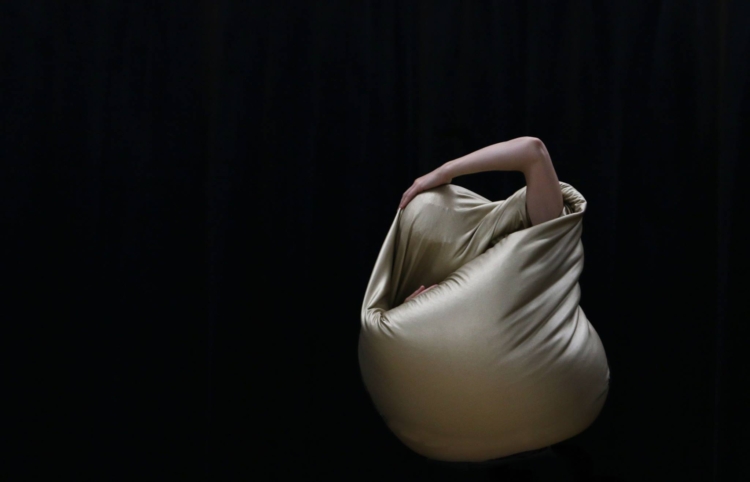 The “Embody” series play with abstraction and metamorphose to incarnate complex shifting identities and interactions. Performed since 2011, the Embody blurs the boundaries between sculpture, bodies, and representation. For this iteration, Shani Ha invited performance artist Amélie Gaulier-Brody to invest and interpret Embody.

This series of sculpture is the catalysis for photographs, installations, and performances. Shani Ha invites the audience, performers and dancers to interact with the piece and invest them in different situations.

The soft sculptures are constantly shifting and adapting to the context and silhouettes, creating successive ephemeral sculptural forms. Embody exists in different temporality and formats, the sculptures can be contemplated steady, in action or be activated.

Not quite from one side or the other anymore, a nonnative constantly oscillates between two realities, fully belonging to none. Through mixed media, sculpture, photography and painting, the artists of Neither Here Nor There examine this state of being slightly “out of tune” and how their experience may have impacted their work over the years. The exhibit also aims to highlight a common thread between all the works – a feeling of detachment of the human figure from its urban environment, within a context of personal narration and a touch of absurdity. The sense of isolation and fragmentation that can emanate from the works is nonetheless often counterbalanced with whimsicality and humor.

In her series Gowanus Dance, Marilia Destot isolates and places her model in a cinematic or sequence form, her photographic work focusing on the intimate writing of time and space intermingled. Exploring the same medium, Simon Courchel creates in each of his photographs an urban choreography or performance thus referencing his background as a dancer; the figure being always insulated and centered within the frame. In Anne Mourier’s small sculptures depicting domestic scenes, the figure is removed all together but constantly in mind, like a ghostly presence, only the habitat remains. Nicolas Touron’s ceramic and video installation Artificial Landscape is a visual fable, existing as a landscape of absurdity in which a dead cicada found at the Brooklyn Botanical Gardens during his numerous explorations there, plays the main character.

Jeanne Verdoux’s prints show the human figure deprived from any context but in constant motion, sometimes in the verge of falling, where ground and air merge into one dimension. Fanny Allié’s characters, often placed on a white background are also removed from their habitat or environment; their urban feel come through nonetheless. In his Artforum mashup series, Julien Gardair combines and cuts Artforum advertisement pages, revealing from these art magazines human silhouettes intermingling with animals, body and abstract elements and creating a chaotic mass. Lastly, in order to remedy the isolation she may find in fast-paced cities, Shani Ha creates versatile sculptures and devices in an effort to bring people together or to add a comforting touch to her surrounding.