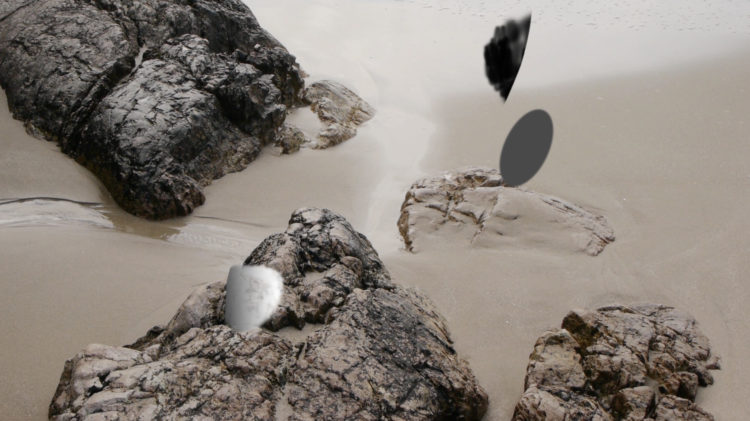 This exhibition brings together works from four artists that consider bodies – human, earthly, and political – through evidence of their edges. Conceptually, we are taught to understand a body as individual and whole as far as it is contained within its designated boundaries or skin. That there even exists a line dividing one’s feet from the dirt, one nation state from the next, or the sand from the sea, is a fiction, perpetuated by an oblique understanding of the material world.

The works employ photography, video, sculpture, performance, and text in order for different bodies to push or sink into one another. In each work, the dense, autonomous human body leaves a record of its emergence – a fusing together of material relationships over the breadth of time. Although each artist’s body itself is absent, its imprints and perspectives are what forms each work. The flexibility and porosity of these boundaries are experienced through the document of an impression, and made conspicuous by the futility of their capture.

Lara Atallah’s series 34.5531° N, 18.0480° E consists of Polaroids made along the Southern European and Western Asian coastlines, along with sun prints made from pebbles and small rocks, culled from the different beaches that were photographed. Bordered by over 20 countries, the Mediterranean is commonly perceived as a place for recreation and leisure, but the sea has become the only viable route to safer shores for the many refugees fleeing war zones. The Polaroids are all deliberately damaged within the first 30 seconds of their development, crushed between the artist’s hands or under her feet. The images themselves are devoid of any human depiction. Instead they infer a subtle violence in the emulsion’s veins and fissures. The sun prints are weighted for a period of time by pieces of the same landscape, but only the earth’s specter remains within the prints. Both the Polaroids and the sun prints attempt to capture the earthly materiality of a contentious political boundary, as well as the impressions from where they came into contact with light and the human body.

Leah Beeferman’s recent work considers boundaries and edges as human concepts. Her video, Coast Forms, uses the idea of a coastline to examine, and reimagine, our formal delineations of space. Borrowing notions from quantum physics, she posits a coast as forever shifting in time, space, and materiality. The fifteen-minute video pulls the viewer into different conceptions and arrangements of spacetime through a careful combination of reality and abstraction. She uses footage of waves hitting the shore overlaid with gestural digital forms to create fluidity between digital space, video documentation, and our own focused — yet blurry — acts of perception. In her accompanying newsprint piece, also titled Coast Forms, she uses speculative text, alongside terms from physics and geology, to reflect on overlaps between scientific and personal observation. Similar to the conceptual demarcation between sea and shore, we tend to see a boundary between these different types of looking — but perhaps, Beeferman suggests, we should not. In both works, she highlights the unfixed nature of something human logic has classified as a ‘line’, while pointing out the impossibility for us, at a human scale, to ever really capture such fixity.

Alta Buden is a Brooklyn-based visual artist concerned with the human relationship with our environment. Consisting of a series of sculptures made of rocks, concrete, light, and hand blown glass vessels, Intertidal traces the path of pollutants from the heart of Newtown Creek, a Brooklyn Superfund site contaminated in the 1800’s, from the Hudson River to the Atlantic Ocean where its pollutants become part of a global water entity. Integral to her process is the time spent at these shoreline sites, indexing objects that contain an untranslatable piece of their origin. Each glass vessel is supported by objects–rocks collected at the various sites and cement casts of the shore. Before the hand blown glass has solidified, she presses select pieces onto their support object, forging a relationship through the shared edge of glass and rock or cement – as if attempting to speed up the evolutionary fusion of these materials. Together they form a portrait of the legacy of pollution of a city, told through its shorelines. Lit to show their abstract reflections, and displayed in a style referencing a natural history museum, these objects illuminate the disconnect between knowledge and beauty through the interconnectedness of disparate things.

In Performance for a Permeable Body (toxicity, build-up, frottage, residue), Carolyn Lambert uses mark making as a performative gesture to think about the impact that humankind is having on the surface of our planet. Mixing a digestible form of carbon with her own saliva, she applies this residue to her arm and shoulder, then rubs it repeatedly on the wall. This action designates the surface of the wall as both stand-in for the skin and recipient of its residue, making visceral the porosity of the body. The remains of this gesture is a smudge. The mark is accompanied by a broadsheet connecting the action to a larger context of landscape and time.

Check out a live feed video from the event here.