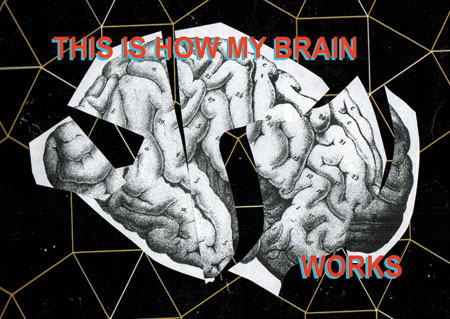 This is How My Brain Works

Radiator Gallery is pleased to announce the opening of its sixth show This Is How My Brain Works, a group exhibition that inaugurates the gallery’s second season. With over 30 works made by sixteen artists, the show examines the practice of collage through its many iterations and permutations ranging from works on paper to artist books, photographs, sculpture, textiles, digital projections and video. Through the presentation of visually diverse but not conceptually disparate works, the show helps define collage as both a working method still robust at the turn of the 21 century but more importantly as a manner of processing information either willfully or uncontrollably. The show’s title is a comical send-up of the precognitive jumble that is the necessary basis for the eventual creation of meaningful logic in the human brain.

Whether culled from magazine pages, scavenged from a neighbor’s recycling bin, plucked from the uncharted corners of the internet–or the physical corner of an urban street—this group of artists shares a love for material with a history. It can be cultural memory, what artist Christian Marclay describes as the “recognition of the source material with the pleasurable violence of transformation”, or it can manifest itself in the physical wear objects undergo with the passing of time. Whatever the case, the audience’s synapses begin to fire upon seeing this new/old thing well before a fully formed idea congeals in their heads. This is what all art is about. Collage highlights this fact.

The current generation of collage and assemblage artists is conversant in the standard and accepted history of the form as modernist paradigm par excellence. While this history obviously informs artists in this show, they have an advantage over their predecessors in contextualizing this working method as pre-modern far more easily due simply to their place in time. The palimpsests of ancient cities and the collage roots of film projection start to seem much closer when looked at from this perspective. What was once considered an artistic reaction to the specific age of communication can be seen in retrospect as a responsive method to connect art and the world in any age.

Michael Lee is an artist and teacher. This is his first curatorial effort. He was awarded a residency at Cooper Union in 2005 and at the Robert Blackburn Printmaking Studio in 2008. Michael earned a BFA in art history from The University of Texas at Austin and an MFA in painting from Hunter College in New York.