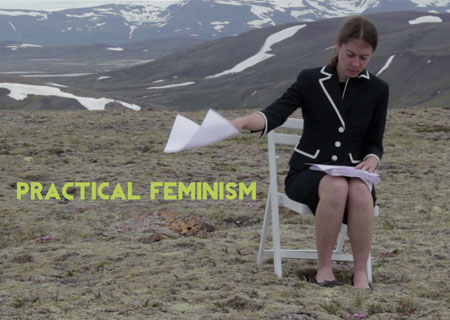 Open Fridays and Sundays 1-6 pm or by appointment

Many of us have had feminist theory classes in which we read and discussed fascinating ideas, but often found them inapplicable to everyday life. While theory is important and certainly has its place, I am most interested in the practical side of feminism. What do we say to street harassers? How do we respond to a family member or close friend who says something offhandedly sexist? How do we deal with the insidious undercurrent of sexism that pervades our lives? And maybe most difficult of all, how do we handle internalized sexism? Creating a new world order is not without its difficulties.

After thinking long and hard about these subjects, I have come to the conclusion that confrontation is the short answer. Being mindful of your personal safety, tell others that you do not agree with them, and explain why if possible. This is easier said than done, but it’s a good strategy to aspire to. I most often find the discomfort of confrontation to be preferable to the feeling of powerlessness. I would also add that pervasive insidious sexism discourages women from being confrontational, which is just another facet of the problem. We all need to look into ourselves and confront the sexism within. It’s more productive to ask ourselves “am I being sexist?” than to say, “I am not sexist” and leave our inner workings unquestioned and thus unchanged.

Eyesplice Collective is a group of artists working in similar veins in a variety of media. The artists are spread out across Baltimore, Brooklyn, Chicago, West Virginia, Austin and Panama. The collective was founded in 2012 by Megan Hildebrandt who chose artists whose work she felt drawn to and with whom she had built friendships in educational institutions and artists residencies. All the artists in the group happen to be women… Or do they just “happen” to be women? When forming the group, Hildebrandt had just graduated from an MFA program made up almost entirely of men. Maybe she craved the camaraderie that women provide for each other, or perhaps she was just drawn to the work of female artists.

Practical Feminism is a collection of the work of these 12 female artists who show the ways individuals deal with feminism on a practical level. For example, Sara Holwerda inverts the idea of a lap dance in a video in which a chair, an object, stands in for a man. Megan Hildebrandt’s delicate cut paper work meditates on her child as both a part of herself as well as a separate individual. Maria Raquel Cochez’s photographs offer the viewer a difficult set of questions when confronted with her photographic diptych of self-portraits, which show her body with breast implants as well as after they were removed. Magnolia Laurie’s work explores metaphors of survival and persistence in the face of perpetual hurdles and backtracking, something every feminist can relate to. And finally, my own work uses semaphore flags to spell out things I wish I had said to men in response to street harassment.

But wait, you may ask, what does this work do to fix the problem of sexism? How does this art exhibition help the world? I would respond that it is definitely helping the artists who make it, and hopefully some of our viewers as well, and I think that in it self is important.