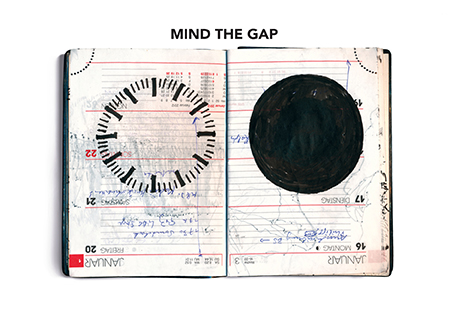 A project of Radiator Gallery, NY and Bäckerstrasse4, Vienna

Mind the Gap is a long-term project that promotes dialogue among artists working in the United States and Austria. It includes discussions, artists’ talks and two group exhibitions: in New York (2013) and in Vienna (2014).

Mind the Gap speculates on the idea that our time could be described as “technological Middle Ages”––a dystopian metaphor for swift technological advancement concurrent with the rise of disadvantaged communities and compromised societies; a condition of scientific progress occurring during crises of collapsing financial and outdated capitalist systems; an era which bases its mythology on technological products that do not provide any alternatives for reforms of anachronistic public models.

Mind the Gap also reflects upon social linguistics. Its basis is a “translation” of the sophisticated language of innovations into mass language, just as in the Middle Ages complicated religious postulates were translated into the language of the illiterate peasants through visual arts.

Finaly the project examines a great paradox recalling a classic dichotomy from ancient times: nature versus culture. An advanced technological society is impossible without natural resources, and constantly strives to fix its broken relationship with nature by offering artificial “natural products” to the consumer. The purpose of Mind the Gap is to examine the ways we perceive ourselves in the current technological, political and cultural landscape. The exhibition presents artists’ reflections that move between a personal approach and overarching metaphors, between the romantic idea of progress and visions of dystopia.

Such dystopia can be seen in the video Hrami by Rasmus Albetsen, who works with visual clichés harkening back to classic black and white cinema. Tension and a sense of mysterious conspiracy, secret phone calls and complicated relationships between the characters abound in the artist’s Hitchcock-like approach. However the mysterious building, the demand for logic in an illogical space and the perverse lust for unauthorized experiment in an environment where evil is master, are reminiscent of David Lynch.

In another video, Terranauts by Adam Frelin, a teenage couple finds and uses a discarded box as a means of exploring their own earthly habitat of Los Angeles. With text printed on it, the box appears as if it once contained parts for NASA’s Kepler Mission (a satellite searching for inhabitable planets). The piece’s new way of framing reality refers to the history of architecture––many Japanese gardens areonly meant to be viewed through a building that acts as a framing device.

Hidden Agendas is a site-specific piece by Mathias Kessler designed specially for Radiator Gallery. The artistʼs idea is to bring the place of energy production back into the realm of domesticity, to suggest that the urban environment today is the place of consumption. Cities are not a point of production anymore, but are rather sites where energy and products are being consumed. Kesslerʼs second piece in the show, Das Eismeer. Die gescheiterte Hoffnung, is inspired by a painting by Caspar David Friedrich. The 3D replica is placed in the freezer compartment of a refrigerator unit which is also stocked with beer. Das Eismeer provides a humorous comment on the global problem of deglaciating polar ice caps.

The work by Olaf Osten, Pendeln 090 (Pendulums 090) monumentalizes various casual and intimate moments, which he has recorded in a notebook, and reflects on the phenomenon of change of physical space in a digital environment. It further asks questions such as: What is the sense of time and space for two people residing on different continents when communicating through the internet? What would happen if they had to meet physically? Despite their desire they would fully embrace technology, by the very use of an aircraft for their actual meeting.

Similar to maps, plans, and atlases, which try to make elusive topics clear by squeezing them into a measurable scale, the series Socialatlas by Judith Saupper attempts to counter human fears with the help of a “technical plan.” Another work by the same artist, Oh, Sweet Suburbia … is an object that represents an altered layout of a typical village or suburban neighborhood. The piece comments on the modern cityʼs vertical structures that have replaced the traditional horizontal ones, thus changing the meanings of “personal” and “private” and exemplifying current political and economic hierarchies.

E-inTime2 by Raphaele Shirley is a sound and light sculpture which occupies the space between past, present and future, and between the realms of nature and science. The sounds are based on philosophical and religious texts collected from around the globe and in different times: modern time discoveries, science fiction excerpts from films, literature and contemporary news. Shirleyʼs second work in the show is an ironic game with the history of technology. A vintage projector is awkardly invested with today’s technology – an mp3 player and a video projector, in an attempt to reactivate the old machine.

In the landscapes by Borjana Ventzislavova nature is transformed into a symbol––powerful and impressive without further details. Depicting nostalgic deserts with a lack of human presence, We Are Nowhere and Itʼs Now and Itʼs Just Me in There and I Am Naked bring associations of cataclysm and catastrophe. Neon signs that have, absurdly, remained lit are the only remaining artifacts, replete with obscure and desperate content. Finally, in her installation Help, the artist materializes the desert and sounds a clear and unequivocal call for help.

The exhibition is supported by the Austrian Cultural Forum New York and Bundesministerium für Unterricht, Kunst and Kultur, Austria