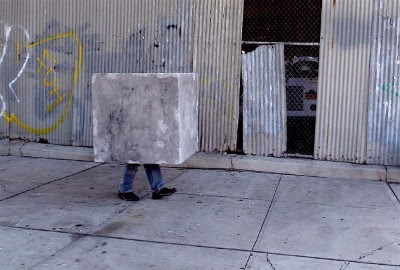 A Roll of the Dice

Andras Borocz will do a performance with 2 film projections and a live sound collaboration by Tibor Szemzo & Laszlo Goz. The walls of a parking lot in Greenpoint consisting of three by three by three-foot concrete blocks piled on top of each other, was the inspiration for this performance by Borocz. The artist continues his explorations as the idiot savant, presenting concrete poetry, a concrete cube costume, and cube boxes made of matzo, which he calls pandoras. These activities were documented by his long-time collaborator, Klara Palotai.

Böröcz started his art career in Budapest in the seventies. During the repressive 1950s, art was dominated by Social Realism. Following the defeat of the 1956 uprising, as János Kádár (the new communist leader) consolidated his power, a new system of cultural politics emerged in Hungary, defined by the so-called “Three T’s” of cultural activity: Támogatott (supported), Türt (tolerated), and Tiltott (prohibited).

Böröcz’s art practice fit into all three categories: After graduating with a degree in painting from the Budapest Academy of Fine Arts, he received the (supported) state-sponsored Derkovits Scholarship, a three-year grant for visual artists. As an active member of Fafej and Indigo (two underground art groups), he created experimental, multimedia performances, which were either tolerated or prohibited.

Böröcz moved to New York City in 1985 where he started to carve wood. In the nineties, Böröcz fell in love with the pencil, as he saw its potential as a material created from a tool. His exploration began with small single totemistic pencil figures and escalated to the creation of large organic plant-like forms from thousands of laminated pencils. Over the years he has continued to make sculptures from a range of common materials, such as corks, bread, toilet plungers, eggs, etc.

His artwork is represented by the Pavel Zoubok Gallery in Chelsea.

Klára Palotai is a videographer and was a member of the former Squat Theatre.

Tibor Szemző and László Gőz were the founders of the Group 180 contemporary music ensemble at the time.

The program is organized as part of the official closing event of the HCC’s Counter/Culture programming series focusing on Hungarian artistic resistance during State Socialism.