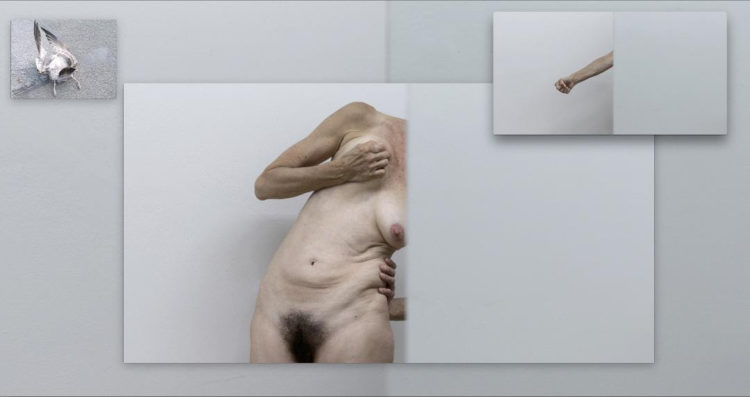 RadiatorArts is pleased to present an exhibition walkthrough and video screening brunch on Sunday, November 5th at noon with participating artists Shanjana Mahmud and Nadja Verena Marcin. The event is part of the exhibition Space Odyssey: Beyond Material Confinements, curated by Nadja Marcin exploring themes like artificial intelligence, gravity, the explosion of movement and feminine architecture. Beginning with Stanley Kubrick’s film 2001: A Space Odyssey (1968), as a reference point, Marcin considers the four artists as a Monolithic mastermind via their collective brain trust. Suggesting that the age of globalization has brought new invisible walls—harmful to society—the show stages manifestations that perforate existing walls and search for those that are invisible.

The walkthrough will be followed by a screening of Claudia Hart’s Dark Knight, 2012 and Susan Silas’s TORSOS, 2017. Marcin invited Susan Silas to screen a work related to theme of the exhibition and she in turn suggested the pairing of herself with Claudia Hart and added this commentary:

When we think of walls we often think of fortifications. Trump’s absurd border wall between the U.S. and Mexico, the wall the Israeli’s built as a barrier along the West Bank green line, the Great Wall of China; the one man made structure that is visible from outer space. And yet, the primary wall of our experience is in fact our own skin. It is the separation wall between ourselves and everything else we experience. It defines the location of the self. Now we are thinking seriously about breaching this wall with new technologies. People have talked of outer body experiences before, usually in spiritual testimonials. But now we are considering leaving the boundary wall of the body altogether and uploading our brains to computers.

We practice for this penultimate event more and more often now, through the imagining of androids and replicants, through the creation of computer code, in the advancements of artificial intelligence and by visiting 3D spaces with VR headsets on. Will we simply merge with our fantasies and artificial creations? It is an open question whether or not we will take the unconscious with us on our journey into the computer. The unconscious is thought to reside in the body, as does the DNA of nearly “everything that came before us: except in the realm of insects, the whole history of life on earth is inscribed within our bodies.” Will we exchange that archival database, as coder Ellen Ullman calls the body, and the unconscious, for immortality?

Claudia Hart and Susan Silas come at these issues from nearly diametrically opposite directions in the two short videos presented here. In Claudia Hart’s Dark Knight, 2012 an animated female figure bangs endlessly against a wall that is invisible to the audience. The figure appears to be attempting an escape from the virtual world. Once inside, will we be desperate to get out? If we have tossed our bodies, what will we escape to? Susan Silas’s TORSOS, 2017 was created using digital tools, but is, in essence, a meditation on the analog world. She considers the limitations of the physical body; its slow decay and transformation into matter no longer recognizable to us as the self that once inhabited an individual body.

At the same time, we watch the destruction of the physical world happening at a madcap rate and it may be that the only form of survival available to us will be cold storage in a computer cloud farm owned by Google or Facebook. Will we too dream of electric sheep?

For more information on the exhibition please go to: http://www.radiatorarts.com/space-odyssey-beyond-material-confinements/