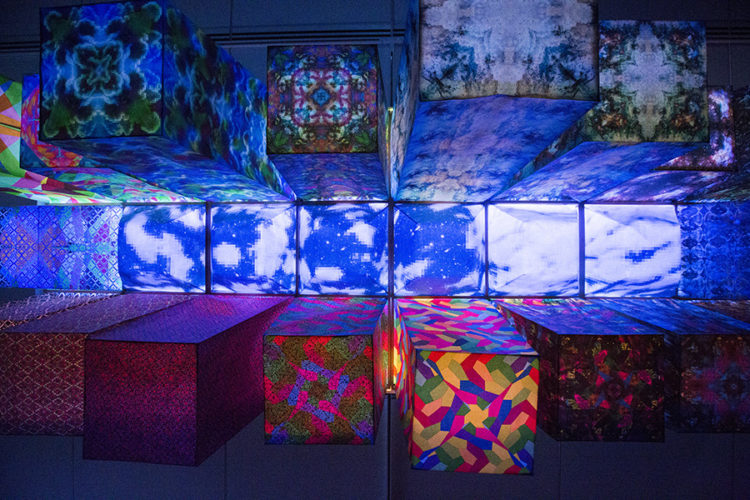 Radiator Gallery in coordination with KAB (Korean Americans of Brooklyn) is pleased to organizing a FREE family-friendly tour of Hypervirtuality on Saturday, January 26,  2-4PM.  Please join us for an afternoon of kid-friendly interactive art experience that explore the themes of physical and virtual realities and how the artists use technology to examine and understand their relationships to one another and their surroundings in the digital age. The curator lead Gallery Tour will start promptly at 2PM.

Please join us for an exciting soundscape performance with by Crew Called Shelf on Saturday, February 1, 6-9pm. Multimedia producer and DJ @crewcalledshelf will be performing a live experimental sound session to coincide with the Hypervirtuality exhibition.

Crew Called Shelf will be manipulating a collective of analog machines and employing a variety of audio synthesis techniques to create a soundscape of controlled but random frequency modulations to interact with the sound and light elements in the exhibition.

About the exhibition:
Hypervirtuality presents a mash-up of physical reality and virtual reality created by three artists that utilize technology to examine and understand our relationships to one another and our surroundings in the digital age. The artists present narratives that explore diverse interrelated environments that are natural, virtual, social and political.

Taezoo Park’s digital sculptures Singularity from his Digital Being series allows the viewer to communicate with a presence/being that is embodied inside discarded technological debris. It reacts to our advances. It responds to our touch. It senses our presence and reacts to our every move. What is it trying to tells us? What are we communicating to each other?  In Jeremiah Teipen’s Touchface, virtual forms protrude into physical space and physical forms are digitized to explore the overlap between the virtual and physical where everything is at once familiar yet alien. Teipen creates surreal trance-inducing environments that is digitally vacuous yet richly sensuous.  Yaloo creates her projection mapping sculptures using both physically sculpted and animated elements in virtual reality that is then projected as video onto a physical form. The resulting work is a surreal projection filled with transcultural icons that exudes color and sensuality, in another words it is lush visual state of gluttony.

Artists Bios
Yaloo is a Korean artist based in Seoul and Chicago. She received her Master of Fine Art at the School of the Art Institute of Chicago (SAIC) in 2015 with a focus on digital image making and video installation. She was the first recipient of Lyn Blumenthal Memorial Fellowship, given by SAIC’s Video Data Bank. She won a gold award by AHL foundation, New York. Yaloo’s works have been part of number of solo and group shows and screenings in Chicago, New York, Seattle, Vancouver, British Columbia, Malmo, Sweden, and Seoul, South Korea.  Her has received full residency fellowships at Headlands Arts Center, Bemis Studio Art Center, La Bande Video, Vermont Studio Center among other. She is also the recipient of AHL Foundation’s Contemporary Visual Art Award.