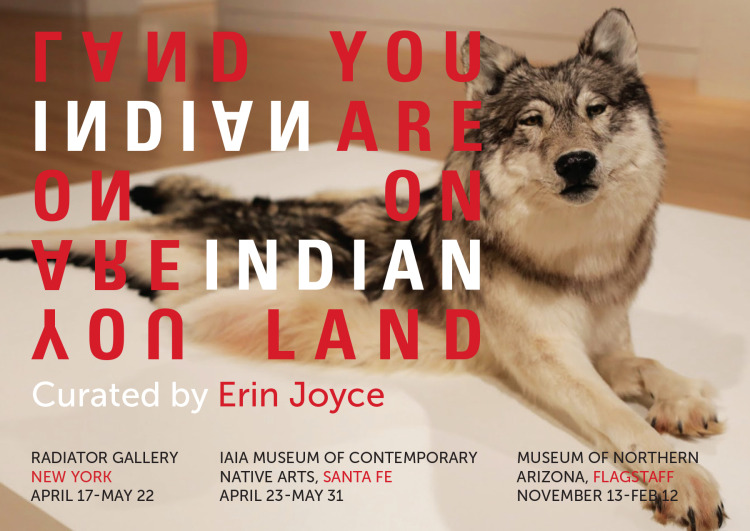 YOU ARE ON INDIAN LAND

The art of Native Americans and First Nations peoples is often marginalized and thought of in stereotypical forms of representation. Oil paintings of Chiefs in war bonnets, pottery, beaded regalia and woven rugs; and while these are accurate representations of a portion of the Indigenous North American art community, it is not by any means the whole picture.

The Indigenous North American art world is one that is rich with artists creating controversial, provocative, and diverse works in a myriad of mediums. With that, Erin Joyce Projects and Radiator Gallery are pleased to announce their latest exhibition, You Are On Indian Land, featuring the work of leading contemporary American Indian and First Nation artists from across the North American continent including Nicholas Galanin (Tlingit/Aleut), Edgar Heap of Birds (Cheyenne), Marcus Amerman (Choctaw) and artist collective Postcommodity – comprised of Raven Chacon (Navajo), Kade L. Twist (Cherokee Nation), Cristóbal Martínez (Chicano), and Nathan Young (Pawnee, Kiowa, Delaware). These artists all actively engage the notion of pop-culture, contested landscapes, misappropriation, and cultural imprisonment in their work. Utilizing pastiche, they create imbricated works that will stand-alone, but also enter into dialogue with one another in the gallery space. Pieces in the exhibition include assemblage sculpture, multi-channel video work, monoprints, and installation pieces. The exhibition, curated by Erin Joyce Projects, will be a three-venue installation, premiering at Radiator Gallery in Long Island City, New York April 17th, at the IAIA Museum of Contemporary Native Arts in Santa Fe, New Mexico featuring the work of First Nations artist Dana Claxton April 23rd, and completing its run at the Museum of Northern Arizona in Flagstaff, Arizona featuring work by Nicholas Galanin (Tlingit/Aleut), Postcommodity, Cheyenne Randall (Lakota), Steven Yazzie (Navajo), and Michael Namingha (Hopi-Tewa).

About Erin Joyce Projects: Erin Joyce is an independent curator, art critic, and scholar of contemporary art. Erin is a contributing writer to Hyperallergic, art critic for Canvas Magazine, and has held editorial positions at GOOD Magazine, ULTRA: EXTRA, and Aslan Media. In addition, her writing has been featured in Salon, SHFT, NPR Art & Seek, and the Modern Art Iraq Archive. As a curator, Erin seeks to bend the notion of how contemporary art is presented and understood. Looking both inside and outside the construct of the museum and gallery as venue for art presentation, Erin seeks to refract art through the prism of the environment and contexts in which it was created.